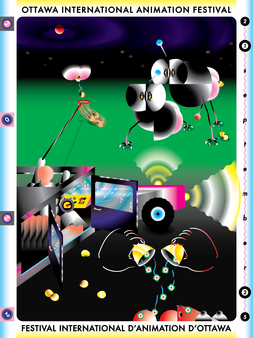 11, Letters from the Edge of the Forest, Remember How I Used to Ride a White Horse, Dislocation, Events Meant to Be Forgotten to screen in different programs at one of the oldest animation festivals in the world.

Launched in 1976, the prestigious Ottawa International Animation Festival is one of the largest and oldest animation festivals in the world, priding itself on its selection of “twisted, provocative and inspiring animation”. This year, the festival runs September 21 – 25, while the program will, among others, showcase five films from Bonobostudio's production and/or distribution.

Vuk Jevremović’s 11 will compete in the category of Non-narrative Short Animation, Jelena Oroz’ Letters from the Edge of the Forest will be featured in the Young Audience 7+ competition.

11 is a film about three masters of football and what goes through their heads as they are about to take penalty kicks. The film scooped up the award for Best Croatian Film at Animafest Zagreb this year, while Letters took home a Special Mention from the same festival. Jelena Oroz’ animation centers on a group of forest animals who learn to write, while at the same time learning a valuable lesson about the importance of togetherness, perseverance and knowledge.

Remember How I Used to Ride a White Horse, created by Ivana Bošnjak Volda and Thomas Johnson Volda, will appear in the World Panorama, making the screening at Ottawa its world premiere. It is a film about apathy, told through a story about a waitress contemplating an escape from her own reality and a patron who keeps recording the coffeeshop soundscape and listening to the recordings.

In addition, this year’s festival edition will feature the festival’s VR competition winners from 2020 and 2021, when the festival ran in online format only, so the program will once again include Veljko and Milivoj Popović’s 2020 award-winning project Dislocation.

Ottawa IAF will also present a special retrospective program featuring the films of Marko Tadić, also sitting on one of the competition juries this year – which will include Events Meant to Be Forgotten, as well as several of his other titles.