A Room for Living

A living room. A place where the private space of a flat is on public display. Using memory, supposition and measurable architectural elements, the space of the living room is continuously constructed and reconstructed, and the action grows into an interpretation of past, present and possible events and relationships. 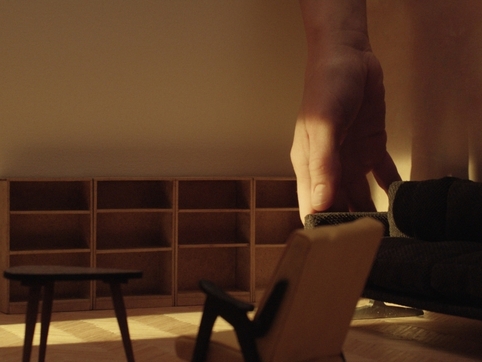 The film problematizes the space of the living room and the events that may have occurred there. These possible events, based on memory or on suppositions, have been recreated through sound – documentary footage, studio recordings and background noise – and they occur in real space and more or less realistic copies of a certain living room. Just like the rest of the apartment, the living room is only a room; regulated by architectural measurements and societal norms, according to its purpose. It is a space that is at the same time exposed to the eye of the public (the guests), a place of representation within a private space, and increasingly, a disused space because it requires the free time of its occupants. The film’s protagonists are established through dialogues with different sources: Architects' Data (E. Neufert), Narratology (M. Bal), Garden, Ashes (D. Kiš) and The House Book (T. Conran).

Ana Hušman's practice disassembles the structures and textures of cinematic elements through film, installation, books, sound, image and text. Husman experiments with the possibilities of animation, documentary and fictional cinematic methods, and the possibilities of the recorded voice and its articulation. Her working process questions and plays with the positions of the amateur and the professional subject of performativity, the medium itself, and the structures that dictate and produce patterns of behavior. She is a lecturer at the Department of Animation and New Media at the Academy of Fine Art in Zagreb and co-founder of the documentary film organization RESTART where she has been holding film education programs for children and young people for many years.