As the camera glides along the façade of the former headquarters of Agrokor, until recently the biggest corporation in Croatia, the film reexamines the ways in which socio-economic shifts affect us all. 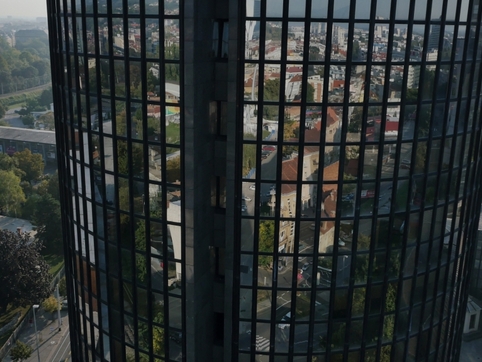 Agrokor was the largest privately-owned company in Croatia until its crash in 2017. The corporation which once employed 60 thousand workers ended up in debt, the owner is under investigation and the firm was completely restructured. The corporation headquarters were located in the Cibona Tower – one of the symbols of progress and optimism inherited from the socialist times. Weaving the narrative from the mosaic of reflexive units in constant flux, gliding across the Tower’s façade, this film seeks to reveal how changes in the socio-political reality reflect on its citizens. In a country in which crime, politics and business are inextricably linked, how do we find who is responsible for the breakdown of one political system and its worldview?

Silvestar Kolbas (1956) is a Croatian cinematographer, photographer and film director. He graduated in Film and TV Camera in 1982 from the Academy of Dramatic Art in Zagreb. Today he is a full-time professor at the same school. As a cinematographer, he has made several features, shorts, documentaries, TV films and series. He also directed several personal, self-reflective experimental documentaries in which he also reflects on the nature of visual media.