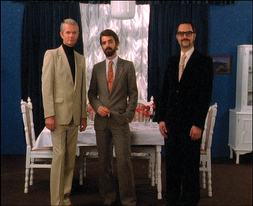 Ana Hušman's experimental film "Lunch" will be shown at the International Film Festival Rotterdam at the end of the January.

The International Film Festival Rotterdam is one of the biggest and most influential film festivals, attracting tens of thousands of visitors and professionals, setting future film trends and uncovering promising new film makers.

We have no doubts that the viewers there will enjoy Ana Hušman's "Lunch", a funny and wittily told story of observing polite manners.

She Who Measures awarded at ZEMOS98

She Who Measures by Veljko Popović is one of the films awarded at the audiovi... more

The Market - selected for Berlinale

Experimental film The Market by Ana Husman is going to be screened at the upc... more

Ana Hušman's experimental film "Lunch" will be shown at the International Fil... more

The films "Morana" and "She Who Measures" have been selected at the forthcomi... more